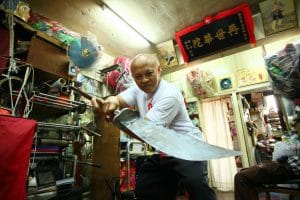 He was born in 1945 at Hoi Ping, Guang Dung – China and then moved to Indonesia.
When he was 8 years old he followed his father from Indonesia to Hong Kong. He started his martial arts and medical practice while he was young, following his father who was a very good kung fu boxer as well as a medical practitioner in Indonesia.

Sifu Cheung loves martial arts. He is a very charitable person and truly an example of a martial art master. In 1964, when Hong Kong was under a very unstable situation, with social disorder, master Cheung saw the situation and persuaded the youth to strengthen their physiques, and so, to restore social order by forming a body building association. With his teacher’s permission, Pak Hok Cheung Kwok Wah Martial Arts Association was established.

During the 70’s and 90’s, Master Cheung had led numerous martial art groups to U.S.A, Spain, Holland and South East Asian Countries, to participate in various tournaments. They received good results and the perfection of their techniques brought them fame overseas.

Thru the 90's Pak Hok Pai martial art had been introduced by sifu Chueng to Italy, Israel and Venezuela. As this happened, the Cheung Kwok Wah Pak Hok Pai International Martial Arts Association was formed.

In 1995, sifu Chueng received the Ph.D Honor, of Chinese Medicine, from the American Coastline University.

Master Cheung also took a very keen interest in the study of Buddhism. In 1997 he was formally accepted as Monk Sik Mong Sang’s follower and received the Five Commandments. Later on, he went to the Shaolin Monastery in Henan province China, to further study the Buddhist Principles, and also received Shaolin martial art instruction from Master Sik So Hay. He was conferred the Buddhist Title as the 31st Shaolin generation, Sik Tak Wah.

Master Cheung is a non-stop learner and even now at his 70's, he continues to study, developing himself continuously. Because of his good medical practice and together with his kind virtue, he was well respected by the public, as he often offers free consultation and medication to the under privileged. For that, he also gained respects from the medical profession community.

Master Cheung is currently holding over a dozen public positions in the various organizations. He vowed taking medical practice and martial arts teaching as his life career, and to devote his valuable experience to the society in the development and improvement of the Human Physiques, all over the world.