Pak Hok Pai has a long history, reaching the days of ancient India (2500 BC). That time there was known a martial art called Simha Nadda Vajra Mushtti  witch the Indians attribute it to their god Indra. It's Sanskrit name means – Simha – Lion; Nada – Roar, a warrior's battle cry; Vagra – Diamond/Thunder Bolt; Mushtti – boxing. Shakyamoni Siddharta Gwatama (the Buddha), who was considered the lion of Shakia, the tribe he was born to, was a scion of a royal family, prince. It is said that when he was born, he pointed with one hand to the sky and the second to the ground, and roared like a lion. By that he announced his arrival into the world. At age 7 he practiced martial art called Panchaviddya – five arts of the warrior kshateria. His teachers were – Arte, Kelama, Rodrackaraama, and kshantideva. He got Most of his learning from kshantideva that taught him – Malla Yudham (wrestling), Mushtti Yudham (boxing), gymnastics and weapons fighting. They were all called at the end Simha Vikarida (Lion Skill). Its other name was Simha Nada Vajra Mushtti (Lion Roar Diamond Boxing).

Shakyamoni brought Buddhism to the world, and throughout the ages it developed and penetrated to Tibet doctrine called Vajra Yana (Diamond Chariot). It is known also as Tantra-Yana. At that time, the Dalai Lama ordered that a top martial art should be developed in order to banish the evil from the physical aspect of the world, so it will not trample the spiritual world and its work. To fallow that order, the Buddhist monastery order, went on Mount Meru (Mountain Cailaash). Once the art was completed, Simha Nada (Lion Roar) who was the chief monk climbed to the edge of the mountain and roared like a lion, indicating a supreme art was created. It is said that with him pointing with one hand to the sky, and the other to ground (as Siddharta), heaven became Black, hell has been compromised, and demons fled the world's most distant edges. This style became known as Simha nada Vagra mulane (Thunder Bolt Lion Roar), which Later became the art of Pak Hok originator, Ah-Dat-To. The art was also known as Potala Singwa Ngwe (Potala Palace Lion Roar) – the art of the Dob-Dob fighting monks and the  Dorje Drolo.

Ah-Dat-To was born in 1365 in Yue Shu Province, Shanghai China. He was born to the tribe of nomadic ethnic Han, who traveled thru Russia, Mongolia, China and Tibet. One day he witnessed the murder of his parents by a barbarian gang, who wanted to steal their home, and was then collected by his uncle who had three other sons. Since it was hard for his uncle to hold another family member, he handed him to another family who adopted him. After some time they sent him to a Buddhist monastery in Tibet called Potala

(Enlightenment), who was a section of the Vagra Yana of the kagyu school, of Dob-Dob. The Dob-Dob where fighting monks used as bodyguard of the Dalai Lama, Ponchan lama, monasteries and their treasures. Their profession consisted of Mongolian wrestling (Bok – from it Chinese wrestling – Shwei Jiau, evolved), Kom-Nia (Neingnapah in Tibetan – from it Chin Na was evolved), and klaripaiato.

The Legend says, that at age 15 Ah-Dat-To has been crowned as lama (teacher), and that even the older monks could not compete with him. This class gave him the honor to learn from Gong Gat Lama (Con Kit), which was a Dorje Drolo (Diamond Guard), and is considered the reincarnation of Padmasambhawah lama. The latter was considered second after the Buddha. Ah-Dat-To learned the art of Simhanada Vagra Mushtti. He also learned the art of Dinaa (wrestling), from a very old man in potala, named Tas-Lai, and elements of mental control (hypnosis) that were studied between the various sections in the region. Since he wanted to develop his Buddhism and his martial art, he decided to quit to the mountains for 15 years. He ascended to a mountain oriented to Africa where there was another mountain called Mero. On that mero mountain, where the Muslim Sufis and their martial art – barachah.

On this mountain, near the small pool, Ah- Dat-To completed his studies at the convent. One day while meditating, he heard the strident call of a White Crane. He lost his concentration and turned his look the crane. While the crane was drinking water from the pool, a gibon ape erupted and attacked it. The ape tried to grab the wings of the crane, which in response to this, slipped sideways, waved his mighty wings, scratched with its toenails and pecked with its beak. Ah-Dat-To expected the ape will tear the fragile bird and took pity on him. Slowly the ape showed signs of fatigue and Crane took advantage of it, pecked at the ape eye, which screamed and ran into the woods were he came from. The Crane continued his actions calmly.

Ah-Dat-To was enlightened and roared like a lion. One day he was attacked by a group of looters and effortlessly drove them away. He realized that he used the movements of the crane and ape, and started forming a new martial art. The art was based on fast rotations, strong grabing, stamping , and foot work of ape, along with the soft, elusive, smart techniques of the crane. after completing it in 1426, he called his art Potala Singwa ngwe – Potala Palace Lion Roar. Cantonese – Sei Chong Si-ji Hau (Tibetan lion roar). that name was a sign of respect for the original style Simha Nada Vajra Mushtti which Shakyamoni Siddharta Gwatama had learned.

Ah-Dat-To created three methods of practice:
Fei Hok Kune – Flying Crane Boxing.
Lai Lat Sau –  Matria Hand.
Dou Lo Sau- Cotton Wrapping hand.
The new style was brought back to the Potala monastery, where the Dob-Dob and Dorje Drolo from the Kagyu section had learned it. Ah-Dat-To stunned everyone when he presented the power of art. He fought dozens of warriors and did not suffer even one blow. It is said that when he did his meditation at the oak tree, he could  disguise himself with the tree. This was the beginning of the method of the Lion Roar, whose name was later changed by Do-Lo-Katane, the successor of Ah-Dat-To, to – white crane of north Tibet. He thought that "Lion Roar" is too pretentious.

1.Lau Sing Kune (Cantonese – Fallen Star Boxing) – It was created at the Potala Palace by Do-Lo-Katan for the Dob-Dod section. He thought that the Fei Hok Kune (Cantonese – Flying Crane Boxing) is too complex for beginners trainees. This form is based on the movement of ape and contains four worlds, four directions and four fists: Square world, North, stamp fist (Cap Choi). Triangle world, South, Arrow fist (Chin Choi). Crescent world, East, Cannon Fist (Pao Choi). Round world, west, round fist  (Chow Choi). Latter-on more fists were added, and totally there are eight fists, including tiger claws.
2. Fei Hok Kune (Cantonese – Fying Crane Boxing) – It is impermeable diamond, of the Buddha – The Gam Gong Lo-Horn (Buddha guardian which is strong as gold). Together with it, today, there are also the five animals boxing (crane, tiger, snake, panther dragon) and the five elements (wood, metal, fire, water, earth).
3. Mui Fa Kune (Cantonese – Plum Flower Boxing) – Another  intermediate level added by Do-Lo-Katan. This is a method in which the person opens the petals (Jing Lou) and releases the fragrance (his Chi). this practiced is done on the tall poles called Mui Fa Jong (Plum Flower Poles), and  it develops balance, concentration and courage.
4. Lai Lat Sau (Cantonese –   Buddha's Matriea Hand) –  These are the five Stages of kam-na (grabing and locking).
5. Lo-Horn (in Cantonese –  Buddha guardian, arhart) – The last part that  was added, influenced by Shaolin boxing, based on sixteen Tibetan Araharts . This section contains the basic theories of the Simha-Nada-Vagra-Moktti, which was brought to China by Po-Ti- Damo (Budaidhaarama). This method mimics the static poses of arharts sculptures, which led to the development of Shaolin Eighteen Arharts Boxing.
6. Do Lo Sau (Cantonese –  Cotton Wrap Hand) – the most advanced learning, which teaches the internal aspects – Needle Inside The Cotton Hand – Min Lui Chum Sau. It also has an internal soft chi kung, and external hard Chi Kung.

At the end of the 19th century –  time of the Qing Dynasty in China, around the years 1850 to 1865, came to South China Lama Sing-Long Luo-jung (Sage Dragon onorable Monk) 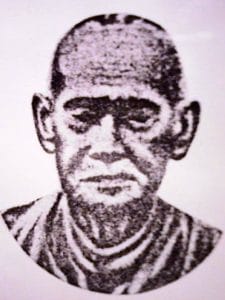 and his  four students. They stayed in the Cloud-Blessing monastery, and taught the emperor's body guards their art. over the years Sing Long moved aside from politics, and got connected with Chinese monks, including of Shaolin monastery, which with he exchanged knowledge. He taught them very little of the Lion Roar method , which was known among them as – Lama Pai (lama sect). during this period, the system also began to receive Chinese elements such as high kicks,  additional foot works,  and other forms were created, with local characteristics (such as the Lo-Horn forms).
Over the years, Sing Long received some students who where not monks. among them,  Chu Chi-Yu, Wong Lam-Hoy, and Wong Yan-Lam . Chu Chi-Yu who was senior, and taught the two others after the death of Sing Long, is considered a generation ahead of them in the heritage. The most famous student of Wong Lam-Hoy was Ng Siu Chung, the founder of Pak Hok Pai (White Crane System), who opened it to the public, and taught dozens of students. It is noteworthy that he had the time to be a disciple of Sing Lung, and learned also from Chu Chi-Yu. One of His most known students was Chan Hak-Fu, which taught Sifu Ton Fai-Chan and Sifu Cheung Kwok-Wha, teachers of Sifu Zachy Shohat, Head of Israel Pai Hok Pai. Sifu Chueng Kwok-Wha studied most of his White Crane kung fu from Au Wing-Ning who was a student of Ng Siu-Chong brother of Ng Siu-Chong.