In eastern cultures, the white crane (Pak Hok) is considered very wise, noble, elegant, long lifed, stable, aggressive assailants. Unlike other styles of White Crane witch imitate the movement of the crane, White Crane system Pak Hok Pai) is inspired by these characteristics. It is influenced by the militant nature of the crane, his fighting tactics and his maneuver abilities.

Pak Hok Pai is one of the only systems that can truly be called "a complete system." it does not limit the warrior's fighting and does not claim any fighting technique is unacceptable. It has been developed through centuries by the Tibetan monks and Chinese teachers, and  got in it all the necessary methods for fighting: long punches – which are the basis for its fighting, short punches, elbow strike, foot work methods, dodging patterns, high kicks, low kicks, open hand strikes, joint locks (Kam-Na), downloads, Mongolian wrestling and even a unique entire soft style. This style witch is called in Cantonese Min Loi Chum Sau, meaning – needle inside the cotton, is similar in its characteristics to Tai Chi Chuan, and completes the system. 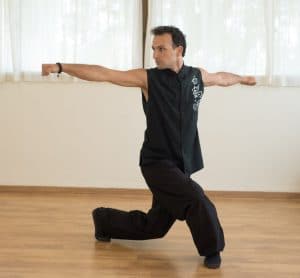 Pak Hok Pai is difficult to learn, it is also aggressive and demanding, so it takes a long time for some one who learn it, to be able to apply its special wisdom and warfare.
The power of the system comes from full use of the waists witch are gathering strength from the legs and generate it out through the hands. Strong standing posture, strong mind and strong-loosened body gives the ability to do so. When White Crane fighter strikes, his whole body participates with the hit, witch becomes destructive and unstoppable. Compression and expansion of the body during the hands motion, creates more hitting power. In pak hok pai there is a saying – "Where there is a movement there is a natural force", meaning that real power comes from the inertia of flowing and continuous movement of the whole body. In this case, the arms and just joining the body like a chain attached to it, and moves only when it moves.

Talking about Pak Hok Pai, You can not set it as hard or soft method. It has a combination of soft loosened body shifting, cotton soft moving hands, witch become hard, powerful and destructive upon hitting the target. 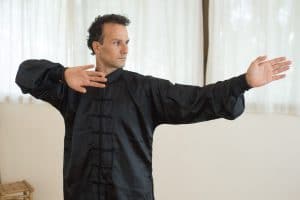 White Crane fighter does not use force against force. He know how to evade his opponent continually, and to keep him away from him. By doing so he also undermined the physical and mental balance of his opponent, who get exposed to the devastating blows of the system. The opponent does not know what hit him, and get hit by another, and another, devastating blows without a break, until he drops down. This can be described as a meteor attack on the opponent. Even if the opponent wants to hit back, the white crane fighter is not where he was before a moment, when he stroked. The opponent becomes confused, his soul and spirit are broken.

When the opponent strikes, White Crane fighter can move, and at the same time, to strike the blows of the enemy and destroy them so he can not complete them. He will strike back where the opponent least expect, and from different and hard angles. To do this, White Crane fighter must learn to be loosened and relaxed (physically and mentally). He should know that he can overcome his opponent, even with just a single devastating blow.
pak hok system does not emphasize the use of defense techniques, Instead, it teaches to move out of the opponent attacks. In cases which blocking is needed, the fists are used to protect and defense, while attacking back. This high capability, saves time and energy while fighting, and requires great courage.

We start from zero. Students begin by learning the basics witch includes flexibility exercises, kicks, reinforcement, punching, stances, simple garbing, basic self defense and fighting technique. Slowly they get advanced techniques enrich the fighting abilities and skills. In training at our school, there is great importance on the physical and mental principles, and continuous practice of art basics. These gives the art the ability to materialize and give practitioner real personal development. Students who want to fight, join the full contact fighting class, including wearing helmets, boxing gloves. In this class we raises up the intensity, and bring the art to the most powerful manifestation.
Advanced students are also study the Min Loi Chum Sau ( Neadle wraped In Cotton Hand – Pak Pok Pai's soft style). They receive the inner soft side of their art and complete their self as martial artists and as human beings who cultivate themselves.

As you can read and understand, Pak Hok Pai is not limited to one aspect, but it comes to meet a wide range of options available to someone who wants to cultivate him self through out martial arts.